The common opossum (Didelphis marsupialis) thrives well near human settlements and therefore understanding its ecology could help taking management decisions in anthropogenic landscapes. Although this specie is very common near human communities in Bolivia, no density estimations have been made up to now. Using direct observation data collected on agroforestry systems on the lowlands of Bolivia we estimated the population density of D. marsupialis.

We covered a total of 70.21 km in 143 night counts, obtaining 38 records of D. marsupialis. By using DISTANCE sampling, we estimated a density of 0.30 individuals ha-1 (SE = 0.062; range: 0.20 – 0.45 individuals ha-1), with a mean encounter rate of 0.54 individuals km-1. Encounter rate varied between habitats, with mean values of 0.20 in secondary forests and 0.64 in agroforestry plantations. Our density estimate is near the lower range of previously reported values for the common opossum in other countries. 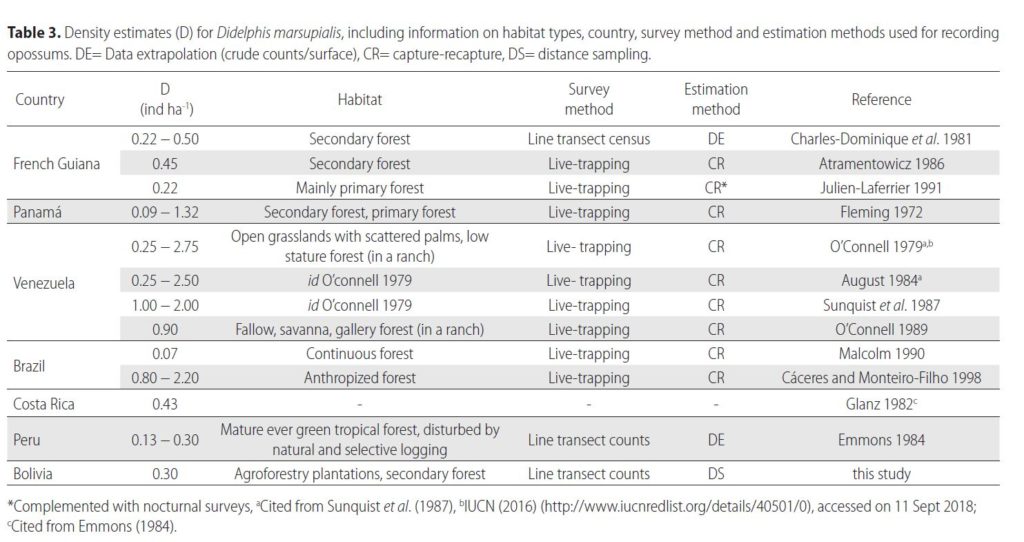 It is notable that our encounter rate was much higher in agroforestry plantations than in secondary forests. The apparent selection and higher frequency of use of agroforests over secondary forests by common opossums in our study area deserves further investigation. Still, we propose that opossums may be more abundant in agroforestry plantations as a function of higher resource availability (food) and suitable vegetation cover as compared to forest patches. The relatively low overall density of D. marsupialis estimated for our study site may be also affected by the presence of domestic dogs (Canis familiaris) and other less common predators, such as ocelots, Leopardus pardalis. Local residents in the community commonly employ domestic dogs for hunting, but only occasionally kill common opossums for medicinal purposes (C. Benavides, pers. obs). However, when dogs are left alone in crops, they hunt to eat, and we confirmed that their prey include the common opossum by observing hunting events. Common opossums are also killed by farmers when found near their homes, because they occasionally prey on poultry. However, they are not considered as a great problem by farmers (C. Benavides, pers. obs.). Future research should also be focused on the effect of predation on the common opossum populations. To learn more about the articles’ methods and outcomes check out the full paper here:

The diversity around the term ‘biocultural’ in the English scientific literature

Mix and Match in the Biocultural World