Farming landscapes in the Global South are increasingly suffering the pressures of multiple global crises involving social, economic, environmental and political factors. Narratives on how to resolve this situation and to guide the design of public policies often juxtapose two idealized development models: agroindustrial farming versus traditional agriculture. This dualistic perspective on rural development fails to acknowledge the heterogeneity of farming practices, therefore providing simplistic solutions for wicked problems.

In this post I synthetize reflections on this topic presented during a panel discussion on “Development models and ecology in the Global South” which took place in the International Forum 2020 “Wellbeing and subjectivities across the Global South” at the University of Tübingen in July 2020.

In my presentation I described examples of indigenous farming landscapes in Colombia to highlight the contribution of biocultural approaches to better understand the opportunities, challenges and contradictions of indigenous, peasant and small-scale agriculture beyond dualistic perspectives.

Models advocating for large-scale industrial agriculture are based on the idea that an input-intensive exploitation of land will lead to increased food production at lower costs and promote rural employment. As a result, cheap food would solve world hunger and provide income opportunities for the poor. However, commodities such as soya, rice, palmoil and sugar cane, are homogenizing landscapes, triggering deforestation, destroying biodiversity, overexploiting soils and water resources (Altieri & Toledo, 2010; Holt-Giménez & Altieri, 2012). The expansion of monocultures fosters the use of crops as feedstuff for the meat industry, as energy source (biofuels), and as inputs into agroindustrial chains (Borras & Franco, 2012). Additionally, large corporations are using agricultural commodities as a low-risk investment to confront the financial crisis, triggering a “global land rush” and pushing people out of their land (Cotula, 2012; Edelman et al., 2013).

Opposing to the agroindustrial narrative is the model of traditional agriculture relying on agrobiodiversity and local knowledge, leading to high quality food production per unit of area, the diversification of landscapes, and a multidimensional wellbeing involving material and non-material aspects that tie humans and non-humans together (Altieri & Toledo, 2010). While it is key to analyze the elements that make this a sustainable response, there is a risk to overlook the evolving characteristics of traditional agriculture: its diversity reflects heterogeneous values, knowledges and practices. To understand the potential solutions, it is necessary to acknowledge the conflicts and contradictions, the internal and external power relationships, the challenges faced by the expansion of urban lifestyles, and the influence of both modern and non-modern values (Cocks, 2006; Porto-Gonçalves, 2009).

The concept of Biocultural Diversity can contribute to understanding the relationships and values embedded in agricultural practices and in farming landscapes. It refers to the characteristics of nature resulting from the links between cultural and biological diversities (Bridgewater & Rotherham, 2019). By doing so, instead of promoting binary and simplistic models, this perspective considers the heterogeneity, the simultaneity and the disputes of values and practices.

In Colombia, public policies promote rural developments models based on the values and practices of agroindustrial farming. Indigenous, peasant and small-scale farming are considered non-viable because they are subsistence based, because of a lack of financial assets, and the general failure to generate sufficient incomes from commercialization and to guaranteeing its own reproduction as a system. Therefore, they are pushed to transform towards an intensive exploitation of land and a homogenization of their production systems responding to globalized markets.

However, according to FAO (2018), diversified, small-scale, family farming accounts for 57% of rural employment and 70% of agriculture and livestock production in Colombia. With less than 20% of the land, it provides essential food for more than 45 million inhabitants, with a very tiny support from public policies. The diagnosis of its non-viability is a result of an over-simplistic assessment based on purely market-economic values.

A biocultural perspective can shed light on the material and immaterial relationships embedded in economic, cultural, political and environmental practices led by indigenous, peasant and small-scale farmers. As it can be drawn from the cases from Colombia (see figure below), the heterogeneity and constant transformations come from the hybridation and conflicts emerging from the dialogues and conflicts between values and practices. 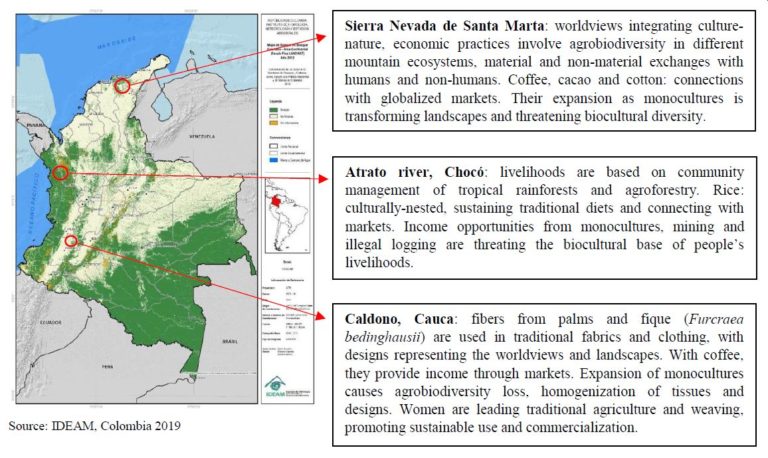 By recognizing farming landscapes and agriculture as manifestations of biocultural diversity, we can acknowledge their hybrid traits and recognize non-dualistic explanations of their transformations, dialogues, conflicts and challenges. A biocultural perspective can promote a solutions-oriented research and inform policies adapted to diversity, difference and change. We need to promote dialogues between academia and public policy, inter and trans-disciplinary research, and a recognition of different worldviews and knowledges that can contribute to understanding the heterogeneity of farming landscapes beyond binary narratives.

The diversity around the term ‘biocultural’ in the Spanish scientific literature

Mix and Match in the Biocultural World